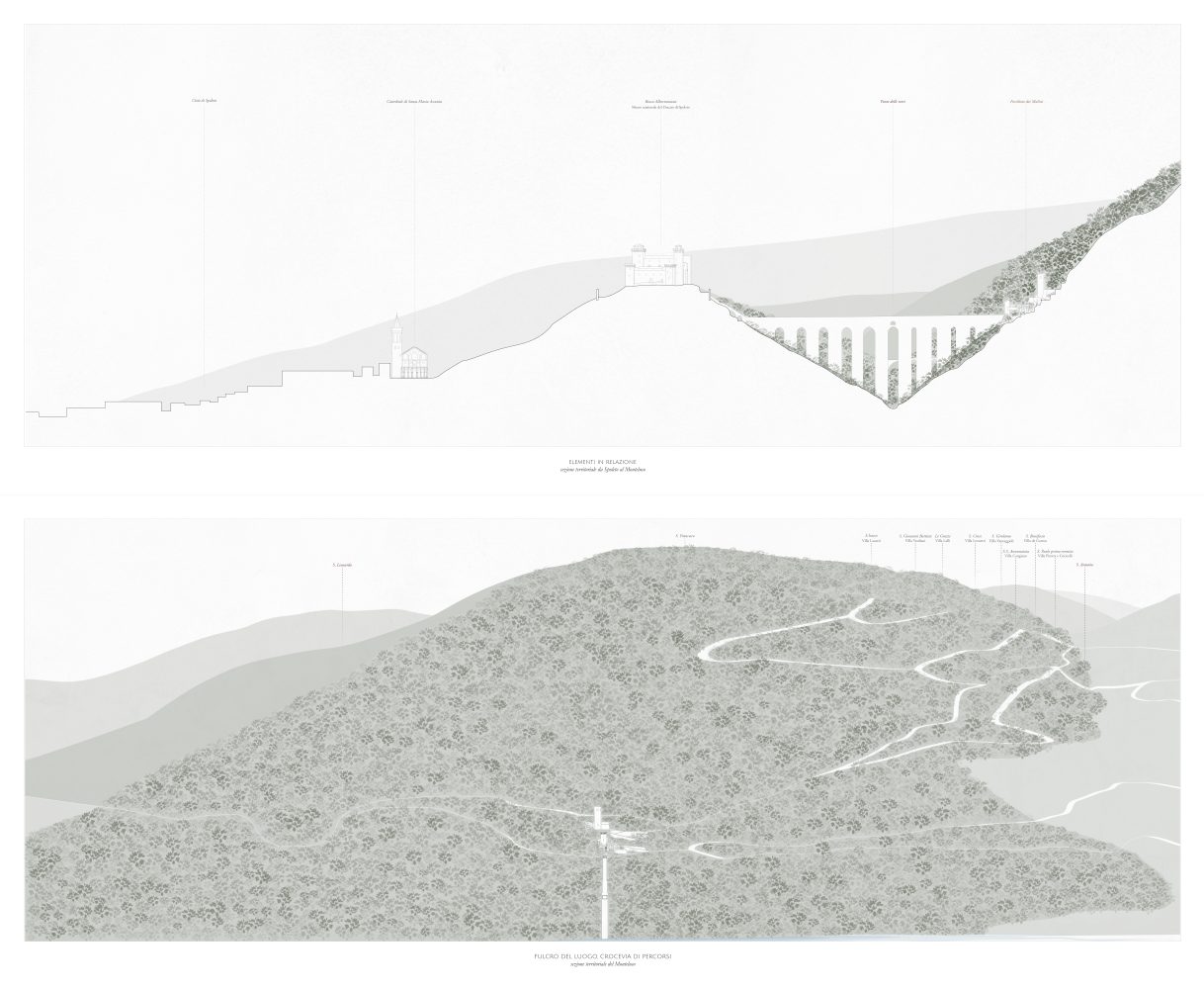 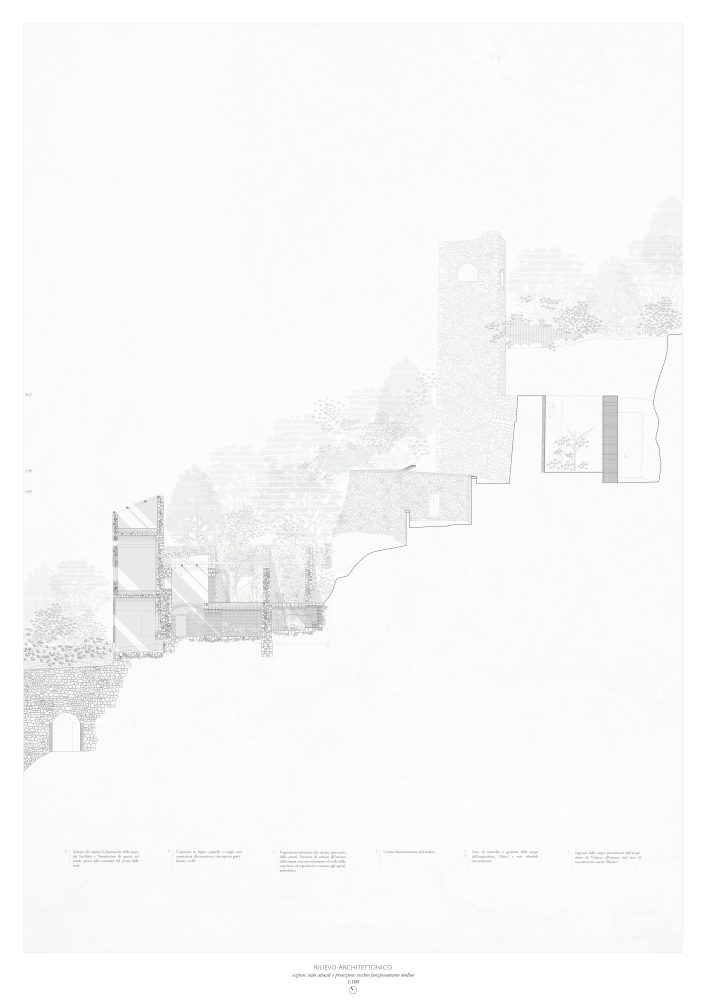 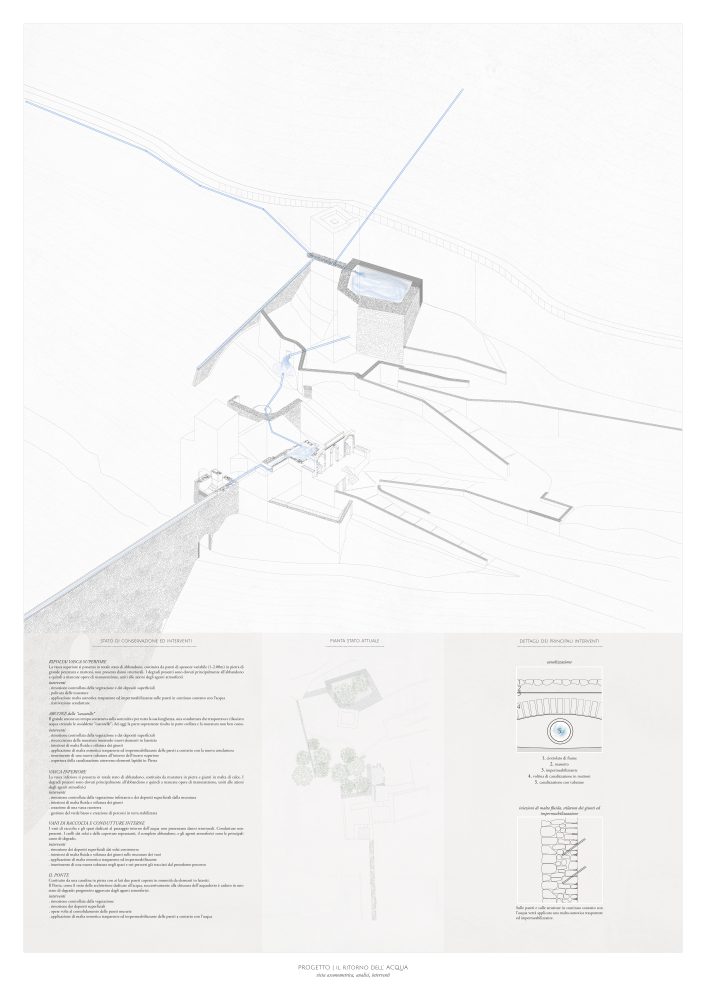 Art.1 –The concept of a monument embraces not only the single architectural work, but also its urban or rural setting, which is marked with the footprint of a given civilization, of significant development, or of a historic event. This applies not only to great works of art but also to more modest works of the past which have acquired cultural significance with the passing of time. Venice Charter 1964

The setting and the research

The present work is a project for the restoration of the ancient Fortilizio dei Mulini in Spoleto. The building, architecturally complex as well as historically important is connected to the Ponte delle Torri – a medieval aqueduct walkable on top of it- which stretches between Collina Spoletina and Sacred Wood of Monteluco. The fortress is located in an area dense with cycling and walking paths, first of all, the Franciscan Path, of international appeal. Three UNESCO sites lie along the route between Spoleto and Assisi as well as this valley also winds into the Fascia olivata Assisi-Spoleto – an area rich in olive trees – which was the first Italian addition to FAO’s Globally Important Agricultural Sytems.

First cited by a document dating back to the 10th century as “towered fortress”, the building granted control and protection over two aqueducts, which supplied water to the city of Spoleto and its mills, until as late as the 19th century. Archive research, integrated with an in-depth analysis of the current conditions, has granted a comprehensive outlook and set the conditions for a project whose aim is the respect and the preservation of the identity of the place.

The main themes of the project

Bringing water back to its place – Despite being modified in its course as a result of recent changes to the aque­ducts, water still reaches the city and flows into drains and drinking fountains. This project includes the renova­tion of the entire draining system and of the related architectural elements, both inside and outside the building, through restoration, waterproofing, and maintenance.

The management of greenery and gardens Intra Muros – The sacred wood of Monteluco and its ever­green Holm Oaks needs to be preserved through the action of mainantence both meticulous and continuous. The greenery is a fundamental part of the scenario, both from an aesthetic and a historical standpoint: it is the witness of the flow of time. Hence, a good reason to not reconstruct the building’s roof and the collapsed covers, so as to grant an insight into the masonry and to create a garden intra-muros -within the walls-, in continuity with the wood.

The rest of the traveler – The project involves a hostel on the upper floor, in the rooms which once belonged to the fortress’ caretaker, for the hospitality of those who travel the Franciscan Path. These accommodations are inspired by a feeling of home and provide the traveler with the rest needed at the end of a day of walking and with the simplicity that complements spirituality. Equipped with all necessary facilities, the hostel features both common and private rooms, so as to allow conviviality, but also meditation.

The path of memory – On the lower floor, once the beating heart of the mill, the flow of water is to be restored so that the experience of the old hydraulic factory is partially recreated. Last, but not least, spaces have been remodeled and can host exhibitions, both temporary and permanent,

contributing to the City Council’s projects of cultural heritage promotion.