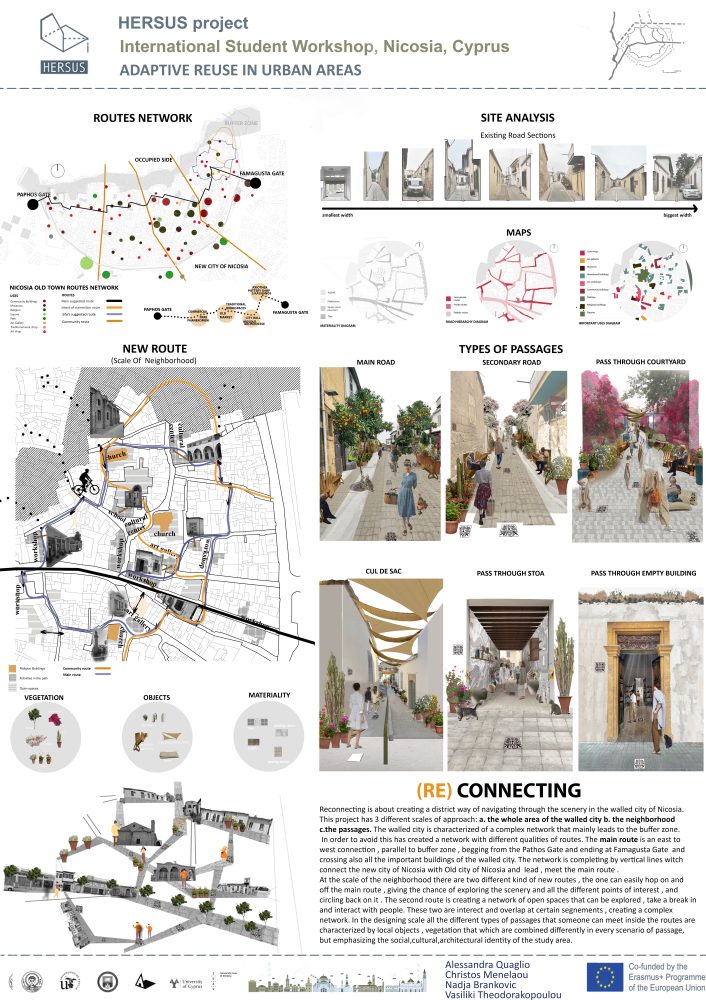 “Reconnecting” is about creating a distinct way of navigating through the scenery of the walled city of Nicosia. By creating a network of routes and open spaces, our aim is to enhance the experience of users, simultaneously controlling circulation. The crucial step towards this goal is working on 3 different scales: 1. whole area of the walled city of Nicosia, 2. the neighborhood, 3. elements of the routes (streets, passages etc.)

The walled city is characterized by a complex network of routes with natural circulation which the buffer zone disrupts. On the biggest scale, our proposal consists of primary and secondary routes. The primary route is an east to west connection, parallel to the buffer zone and it connects the Paphos gate and Famagusta gate. Spanning across the whole area, it connects the most important buildings of the walled city. The secondary routes (south to north connections) explore the possibility of reconnecting the new city and the old city and eventually crossing the buffer zone.

On the scale of the neighborhood, our proposal introduces two types of routes : one consists of a series of open spaces and the other one is a series of paths connecting points of interest in the area. Both of them branch from the main route (east/west), so one can easily hop on and off the routes, exploring the area to their liking. The different routes intersect and overlap at certain segments thus creating a complex network. Routes consists of 5 types of paths (the dead end street, stoa, street, empty building, courtyard) which are easily recognizable. The visual identity is created by utilizing familiar elements from the context and working with local artisans (indicators in the pavement, graffiti, urban furniture, site specific vegetation and sun shade elements).

Organizing these elements results in a sequence of experiences, which are unique to the walled city. Although changing the routes of a lively and chaotic city like Nicosia can be a risky move, this proposal shows how small interventions across all scales, sometimes even hidden can build up resulting in a reconnected city : both in terms of the physical space, but even more important, connections between people.

organized by University of Cyprus

with the participation of